I have been seriously reading graphic novels for a short time now, slowly developing a taste and favorites. The first book I fell head over heels in love with was Jeff Smith’s Bone, a huge graphic novel fantasy opus, sprawling, epic and strikingly beautiful. I have not encountered the balance it strikes between humor, drama and pathos anywhere else. It’s also, for a fantasy opus, surprisingly devoid of the politically questionable tendencies of, for example The Lord of the Rings, which is fed from different kinds of right wing ideologies. Bone is a book, the cuteness and tender romanticism of which appeals to children of all ages; at the same time it is a serious, aware feat of storytelling. In the different peoples, Smith reflects upon issues of alterity, the tourist gaze, different tropes raised by the fairy tale tradition and much, much more. Jeff Smith is not just the writer of Bone, he’s also its artist, and much of the pleasure of that book is derived from Smith’s art. In Bone, Smith shows evidence of a unique way of dealing with his material. 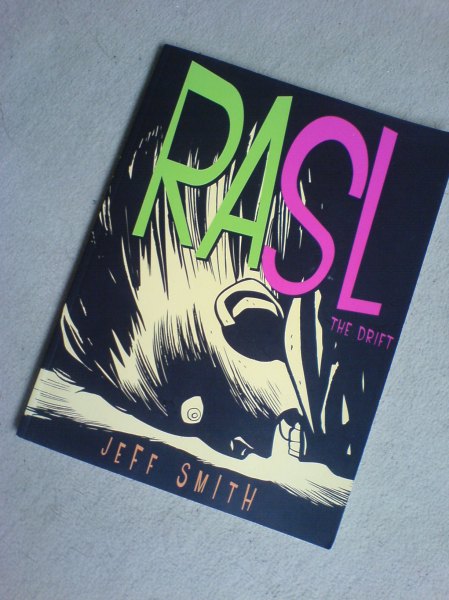 In one and the same book he demonstrates vastly different skills, depending on the character he draws, most impressive for me way the way he handled the bodies of the rat creatures, fluffy yet gruesomely cute monsters. On the same page, when he handled the Bones, a group of cartoonish, simple white creatures that look like, well bones, he adapted his style to a simple, yet expressive way of drawing reminiscent of Kelly’s Pogo or even Disney characters (but the depth of awareness that pervades every page of the book puts Bone miles beyond the realm of Disney cartoons). The ten original Bone books, as well as the 1300 page one volume edition (which I own) were first published via Jeff Smith’s own “Cartoon Books” imprint. As Bone grew to be a huge success, it was picked up by Scholastics. Smith’s next project was to reinvent Captain Marvel (the DC Comics character, yes, it confuses me too) in Shazam!: The Monster Society of Evil, written for and published with DC Comics. As many independent comic writers turn into major publishing house staff writers given the chance and success, many people expected Jeff Smith’s career to take that turn, as well.

Instead, it’s now a year later and in my hands I hold Jeff Smith’s latest book “The Drift”, the first installment of a new series called Rasl (an acronym, pronounced razzle), self-published again at Smith’s own Cartoon Books imprint. Rasl: The Drift collects issues #1-3 of the individually published Rasl comic books. It’s oversized, 10×12, and completely wonderful. If Bone appealed to kids and adults both, Rasl is an adult only graphic novel, containing violence, sex and inter-dimensional travel. The main references in Rasl are, instead of fairy tales and fantasy narratives, noir novels and movies. The book’s protagonist, Rasl, is an art thief who used to be a scientist, as we find out. He’s no normal art thief, though, he steals artworks from parallel worlds, from different dimensions. He travels with a big device that he carries around in two large bags and assembles when necessary. 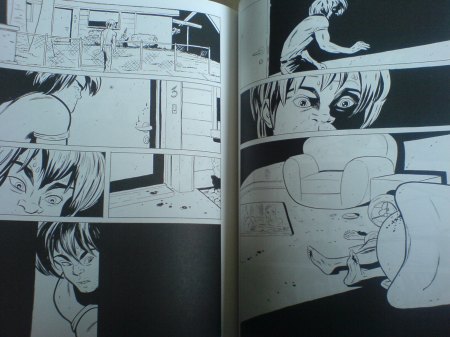 We do not yet know what happened to him, why he embarked upon this course and why he started to steal works of art. Instead, the book plunges us directly in medias res, as Rasl materializes in a dimension where Bob Dylan puts out his music under the name Robert Zimmermann, but this time, his art heist goes wrong, as a lizard faced man wearing a black trenchcoat pursues him, and is even able to jump dimensions as Rasl does. How? Rasl must leave a residue of a kind to enable the lizard faced man to follow him. These and other questions are raised in the book but few of them answered.

Rasl: The Drift is surprisingly long at 112 pages if we look at the actual plot related to us. This is because Jeff Smith is using cinematic techniques, making a walk through a desert as exciting as as the chase after the heist, by lavishing many panels on small details, changes of angle, changes of light. This generous handling of space on the page seems to contrast with the thrifty use of actual details in the individual panels, which can seem sparse, penurious. Where a panel in Bone was able to concentrate an enormous amount of kinetic energy in gestures and bent bodies, Rasl: The Drift is full of rigid drawings which acquire speed and agility by each others company on the huge, black-and-white pages of this great book. The atmosphere is that of Humphrey Bogart’s great movies, caught almost perfectly, down to and including small details from these movies. 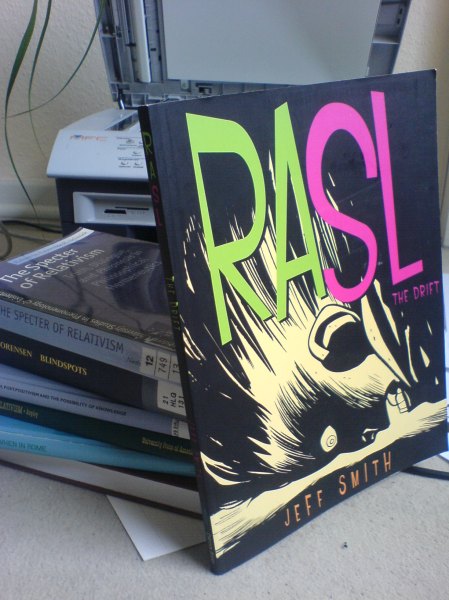 The main topic of the series, the dimension hopping, has only been hinted at so far. We only know that it works, that it is tiring, depleting; we also know that the different worlds resemble each other strongly, except for small details, and all these people exist in everyone of these worlds, except for Rasl and a few others (raising questions of identity and what it means to be human). In this short book, Smith hints at many issues, from gender roles to naming and even the idea of the trace, know from Derrida’s work. Smith juxtaposes the quantum mechanics with a spiritual discussion of ancient native American symbols, he also seems to hint at issues of race and culture, but at this point, my impressions are rather vague. After all, he is only spreading hints here. This first volume succeeds in being a perfect, intriguing introduction to the series as well as an action packed, suspenseful read.

Rasl: The Drift is a short book that dazzles. It’s drawing upon a set of pop cultural sources (and quantum theory has been consumed by pop culture a long time ago) and yet it reads completely fresh and original. I cannot recommend this book or indeed anything by Jeff Smith (although, apart from Rasl, I’ve only read Bone) highly enough. I am eagerly awaiting the second collection, titled Rasl: The Fire of St. George. As issue #6 is going to be published in July 2009, I realize it’s going to take a while. As a reader of George R. R. Martin’s work and a huge admirer of Lawrence Norfolk’s, I am used to waiting, especially if the book seems so worth waiting for.