‘t was a jolly weekend that I spent at the 8th annual Ring*Con, a German fantasy convention that brags being the largest fantasy convention in Europe. It was founded as a Lord of the Rings-convention but has since incorporated other strains as well, although Tolkien’s shadow still hangs heavily over the proceedings. Two other major foci this time around were the Harry Potter and the Twilight franchise. I had some fun. I should have gotten drunk before and during the whole thing, but I didn’t and I guess that’s my fault. So I spent the weekend sober, trying to parse images, ideas and politics. The latter was dire: Any focus on Lord of the Rings implies righteous right-wingery and somewhat competent critics tripping over their oversize magical cloaks, metaphorically speaking. The inclusion of Twilight apparently gave license to some of them to spout even more nonsense than they would have habitually done. Speaking and writing about books as poorly written as the chaste chants of Edward’s and Bella’s sparkly love affair invites some critics to self-righteously attack their own profession and its standards (while still using the same, in what I call ‘idiot’s paradox’).

However, first things first. The convention took place in the outskirts of Bonn, about five minutes with the subway from where I live, in the marvelously plush Maritim Hotel. Most of the non-commercial activity took place in four different rooms, or halls, rather. There were lectures, discussions and, what’s usually the center piece of these kinds of conventions, as far as I know, panels with the star guests. The Ring*Con is organized by the FedCon GmbH which organizes a SciFi convention once a year at the same location. Last year, FedCon panels starred celebrities such as Summer Glau. By contrast, at this year’s Ring*Con, the biggest star was Tom Felton, who plays Draco Malfoy in the Harry Potter movies and who was a no-show. Instead we got Kyle Schmid and Dylan Neal, stars of the mind-numbingly bad show Blood Ties, we also got Matthew Lewis who plays Neville Longbottom in the Harry Potter movies and five different actors who played minor roles in the Lord of the Rings movies. Lastly, Edi Gathegi and Christian Serratos who play similarly minor roles in the Twilight movies. So, the glamor factor was very low. However, a few of those almost-celebrities were great fun. Three of the Lord of the Rings actors put on a hilarious show on the last day of the convention, drawing the largest crowd of all the events I saw.

This convention was, to a huge extent, about fun. There were a few people selling things, a man tattooing customers, the usual assortment of commercial offers, but also two men who built a huge table with small painted figurines, thousands of them, to depict Sauron’s vast armies from the last volume of the Lord of the Rings (see picture below).

There were makeup artists for hire, but dozens of people came with incredible costumes, incredibly elaborate and colorful makeup. There were all kinds of movies for sale but there was also a group of amazingly talented people presenting a movie based on one of Tolkien’s myths, screening it for free and they will also put it up for free on December 1st.

The movie’s called Born of Hope and Kate Madison, director, producer and actress should be congratulated for the amazing work she did on a tiny budget (picture of cast below). In fact, that movie was the best part of the whole weekend. It tells the story of Arathorn, LotR’s Aragorn’s father. Their screenplay is based on a tiny note in the appendices to J.R.R. Tolkien’s conservative canter through myth and (old English) language and sundry areas. The language of it is a nice pastiche of Tolkien’s own style, with all the flaws and benefits this implies. In the movie there is great acting, absolutely great editing and surprisingly great visual effects. The whole movie was shot over several years and with a budget of roughly 25.000 pounds. Here is the page where you can access the project, where you can support them and where they will put up the movie come December 1st. Go there, support them, and read about them. Their energy and patience is inspiring. Don’t miss out. 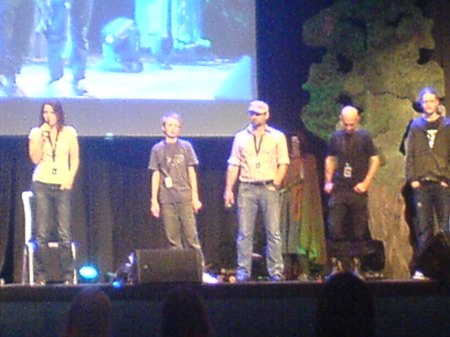 Less fun but still entertaining enough proved to be the multitudes of lectures. There were the competent but dull ones like Heidi Steimel, who talked about fairy tale parodies or Dr. Oliver Bidlo who talked about Tolkien and the sciences and Tolkien and science fiction. There were those with lectures that were competent, less dull but still verging on the trivial, like Germany’s foremost expert on vampires, Friedhelm Schneidewind. Schneidewind’s lectures on immortal beings and vampires were clearly based on a vast knowledge of the topic, although one based on breadth rather than depth of knowledge. I’ve taken notes on books and movies that I haven’t even heard before but will read and watch in the near future. Steimel, in contrast, is methodically competent but not particularly well read. Schneidewind’s major weakness is his enormous ego. He is too fond of quoting his own nonfictional work and his own awfully written play based on Sheridan Le Fanu’s charming novella Carmilla, as well as other people praising his work. This is not incidental, it exemplifies his style of talking, of presenting information and knowledge. On a convention that banks so much upon lightness, enthusiasm and generosity, this is more than a small weakness.

But that was nothing compared to the single most incompetent critic I have had the displeasure of listening to in well over two years. I won’t mention the name of the lecturer here, but she was shockingly awful. Her lectures were characterized by a complete and utter lack of understanding even of basic literary critical methods, of literature in general, of the basic difference between analysis and value judgment. She delivered cheap jokes that revealed nothing but her own lack of any kind of understanding. Her referencing of Sir Philip Sydney, Alfred Lord Tennyson to support her inconsistent thesis highlighted the enormous extent to which her mind is fed on wiki knowledge and easy google-able bites of text. In a defense of sorts of the Twilight franchise she built a thesis on what I call idiot’s paradox, which is what happens when you build your thesis with tools that you, on the other hand, reject on principle. All of this was laced with a dismissive attitude that was offensive to a large portion of the audience, some of whom, among them Mr. Schneidewind, complained afterwards.

But this was, although annoying, very entertaining. These paragraphs cannot properly convey all that I experienced this weekend. To sum up, it was a lot of fun and I am deeply indebted to a wonderful woman to’ve made it possible for me. If you find the time, I can recommend it to you. I wouldn’t have missed it for the world. Although I’ve spent little time reading this weekend, finishing a novel by Roth (The Humbling) and some secondary literature, it was worth it.