As I sit down to write this, I am looking through a large window, high above Hamburg, onto the darkening city below. Last week, I was in Bucharest, which is a magnificent kind of city. There is chaos almost everywhere one looks, houses barely standing. Architectural and stylistic periods are jumbled so badly that sometimes the city feels as if someone playing dice has had a hand in planning its streets and arrangements. The older, more beautiful buildings are often decaying, the sidewalks are rotting with A/C fluid, urine and spit. I want to say that this city has a certain charm, but that doesn’t begin to describe it. I think that this city is positively bewitching (click here for some pictures of the trip to Bucharest) I don’t know that I would want to live there, deal with its odd problems on a day-to-day basis. It doesn’t seem a very good city to have to depend on in your everyday life. As a visitor, however, this city overwhelmed me. Walk down any street and you will find something astonishing or surprising. The first day in Bucharest, I walked down its streets with my mouth open with delighted intrigue, and for the whole week that I was there, it didn’t really change. And at the heart of it all, it seemed to me, were Bucharests insane amounts of churches of various denominations. All the churches I entered were deeply, terribly impressive. These are churches built for people who are actually afraid of God, people who accord God a central place in their lives. To see people kneeling on the ground, wailing, holding their hands to various altars and prayer books, it was one of the most aesthetically amazing things I’ve ever seen. In this light, visiting a church on my first afternoon in Hamburg wasn’t maybe the brightest idea. While churches in Bucharest are frequently darkened places, Hamburg’s churches are always light and vast. People sit down in their churches with an unbent back, staring at their prayer book as if daring it to stare back. While in Bucharest, children partook of the rituals without visibly or audibly complaining, the few praying children in Hamburg twitched with impatience. When bad things happen in our churches, people leave the church altogether, as if it was a book club or an internet forum, or something similarly silly. There is nothing at stake for our faithful in church. God is important, true, but we look him in the eye. I don’t think I’ve been so disappointed in my whole life (well…). After Bucharest, I came here with a newly discovered interest in faith and churches. I had at least one good discussion about it there, but the one person I talked to here, a short man slightly soaked by the torrential Hamburg rain, was defiant and aloof. And the more time I spend in this city, the more I come to feel that this is quite typical of the city itself. I haven’t been to the outer districts yet, but the central parts of Hamburg (after all, I only saw the central parts of Bucharest either. Hamburg becomes more interesting when you leave the center. Parts of the town like Altona, and Eimsbüttel are more interesting and surprising) are made to impress outsiders. Surfaces are gleaming with prettiness. After a fire ravaged the city in 1842, the whole city was rebuilt, in parts mimicking older epochs, in parts reflecting late 19th century styles. And after the city was destroyed a second time in the second world war, when Germany’s crimes returned to haunt the Germans, the city was rebuilt a second time, and this time it was partly restored, partly rebuilt with modern architecture. You can see wild mixtures of epochs here, as well, but they are, as most of central Hamburg is, uniformly dull. Hamburg, in contrast to Bucharest, is a pretty city, well built, well constructed, well maintained. I was itching to take some photographs but I was almost constantly bored by what I saw (see some of the pictures I did take). There seems to be nothing necessary in the way that central Hamburg goes about its business, nothing terribly exciting. It’s there to show us the cleverness and taste of the people living in it and ruling it. Earlier this year, Hamburg elected a new mayor (who is also kinda the state governor), and journalists wrote about how low the public interest in this election was, and how few people actually went and voted. After this week in the shining kingdom of dullness, I can understand this very well. Even Cologne is preferable to this. Thankfully, I have the memories of a week spent in a frighteningly beautiful city to tide me over this disappointment, as well as two dozen pages with notes and drafts. I will be in Hamburg for another two days, hoping for an epiphany. You never know. I love big cities. They tend to surprise you when you least expect them to.

As some of you may know, I am currently in Hamburg. It is my fourth time here, and that may be part of the reason why Hamburg seems an infinitely more dull city than Bucharest. Here is the main reason why. Below, a photo of yours truly (click to enlarge (admit it, it’s a pretty awesome photo!), and if you follow this link, you’ll find some more random photos (including two more of yours truly) from Hamburg, far fewer ones than the Bucharest photos. 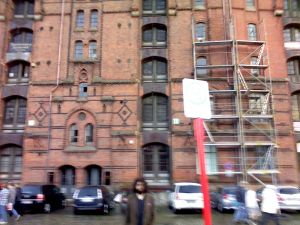 “It wasn’t like this before,” said one woman standing close to one of the two burned-out police cars. “It started out as a peaceful demonstration. The police shot a guy here last week and they lied about what happened. They said he pulled a gun but he wouldn’t have done that with armed police. They shot him so badly that his mother could not recognise him.”

Most of the crowd consisted of onlookers, who jeered at police vans as they arrived. There were chants of “we want answers” and “whose streets? Our streets”.

“26 authors—13 women and 13 men—as well as an editor and a literary agent”, including the likes of David Anthony Durham, Steven Erikson, Patrick Rothfuss and Brandon Sanderson, attempt to answer the questions posed by Clarkesworld Magazine: What is at the heart of Epic Fantasy? and Why do you write Epic fantasy? From Durham’s answer to the second question, this bit, which also explains why his work, despite its massive, massive flaws, is still so attractive

I love the unlimited creative possibilities of fantasy. I’d written three historical novels before starting the Acacia series. The third, Pride of Carthage, was about Hannibal’s war with Rome. It was a massive conflict with amazing events and twists of fortune and inspired leadership. It was epic. Leaving that novel, I wanted another epic. The world building I’d done for the ancient world got me craving writing in an imagined world where I had more freedom to mash things together that were never mashed together in actual human history. How could I write a novel that mixed opium addiction with the Atlantic slave trade in a pre-industrial world that includes Nordic, African, European and Asian inspired cultures in the same empire, and introduce a foreign invasion that endangers them all, despite their differences? If I was writing straight history that wouldn’t be possible. A lot of historical writers would probably never want to do something like that. I did, though. Fantasy was the obvious choice of genre that would allow me to recast all those things in one big package.