I’m currently kinda, sorta on holiday and yet here we are. Another (very) short review. This one is of a book I picked up in this lovely little French bookshop in Bucharest, a book I read while hiding from the grueling heat in pleasant shadows here and there. The book is Pénélope Bagieu’s first standalone graphic novel Cadavre Exquis. I’ve come across her work here and there, especially bits from her blog Ma vie est tout à fait fascinante, which has also been published in book form. The book that had drawn my attention was a more recent one, but Cadavre Exquis is the one I ended up reading. Her blog, and her serial graphic novel Josephine are, or appear to be from what I saw, autobiographical and a cursory look at the protagonist of Cadavre Exquis and a photograph of Bagieu would suggest a similarly inspired story – that approach would however, leave the prospective reader unprepared for this amusing, clever, even a bit poisonous book. Bagieu tells us a story that is many things at once, and she never gets her emotional registers tangled. Cadavre Exquis is a touching coming of age tale, a mild satire on the literature business, a double play on the ‘death of the author’, and what’s more, she writes a story about the importance of reading, more than the importance of writing. It’s really a book about reading and being read, in many ways and also, which is why I hesitate to reach for bigger terms, a story that feels very delicately balanced, a book that might not deal so well with being too closely analyzed. It’s interesting that according to Wikipedia, most of her followup books are not written by her, or not written by her alone, because I can see this kind of writing, which is so precariously set up, turn bad with worse luck. Some parts that currently work just the way they are might end up being rushed, some ideas too cute, some too labored. Bagieu has a fairly large portfolio as an artist now, and I greatly enjoy her art in this book, but it’s the development as a writer that I would be most interested in. Yet Pénélope Bagieu is still very young, we might get a sophomore book yet that’s fully written and drawn by this most intriguing artist and writer. Meanwhile, all future anticipations and worries aside, her method, such as it is, has worked extremely well here and I can recommend this book to all who would like to spend a few moments reading an adorable story of love, writing and authorship set in the colorful Paris of our time. 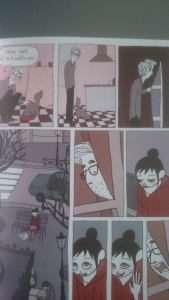 As most of us probably know, the title of the book refers to the well known game that I’m sure we all played as kids. Invented by French surrealists like André Breton and Yves Tanguy, it chops up language on the basis of a fixed rule to produce a new effect. Here’s a definition

Based on an old parlor game, Exquisite Corpse was played by several people, each of whom would write a phrase on a sheet of paper, fold the paper to conceal part of it, and pass it on to the next player for his contribution. The technique got its name from results obtained in initial playing, “Le cadavre / exquis / boira / le vin / nouveau” (The exquisite corpse will drink the young wine).

The rule is fixed, and produces the final text (one thinks of American poets like Jackson Mac Low and his work on non-intentional writing. At first glance it’s a strange concept to be the title of a book that’s as warm and lovely and charming as Bagieu’s graphic novel. But the book makes multiple uses of the title. On the most simple way, there’s a rather unusual -if not exquisite- kind of corpse that’s prominent in the book. This use of the title is, I admit, not clever or subtle, but it is adorable, and given Bagieu’s art, ‘adorable’ is clearly one of the desired qualities. The book does go further, however. In a way, having scuh a culturally deeply rooted title allows the author to string along various plot elements that could seem banal, but are shown to cohere. Bagieu’s protagonist is an ill educated young woman who spends much of her life living with a lazy, rude, unemployed man, running away from home to work, which is not a lovely place either. She works as a hostess, paid to look pretty and point to various goods, from cars to cheese. Men frequently grope her amd she works long hours for little pay. There’s a melancholic dreariness to her life that we quickly realize as being a setup to a kind of romantic comedy. The book works through this early development efficiently. Within a few pages the plot goes rolling and we are rolling with it. The book appears to take care to take us with it, playing on the usual registers with exuberant ease and Bagieu’s lovely art is the perfect accompaniment to this story. If you hate that kind of story, it won’t help you when I tell you there’s a sudden change at the end, because the book relies on its readers eating it all up.

Let me repeat. This is not a cerebral exercise. This is a light, enjoyable read. Its skill and cleverness is the proverbial icing on the cake, but the cake itself is soft and light and lovely. If you don’t like that, the book is not for you. Even when it suddenly morphs into a (light) satire of the publishing industry and the easily manipulated taste of the reading public at large, including critics, the main goal is to entertain us. Its satire doesn’t present new insights. There are good books on how critical and ppopular taste is construed, how we judge art and how the various elements in the cultural system interact to create opinions. Barbara Herrnstein-Smith is probably the go-to choice here. But like any good satire or criticism, Bagieu’s comments can be turned around to be used to comment on the book itself. After all, criticizing the cult of authenticity may feel a bit rich coming from an artist who made her bones writing autobiographical stories and who keeps drawing cute, large eyed protagonists that look an awful lot like the artist herself. But Bagieu doesn’t care. That’s one advantage of the lightness of her approach. It can take the self-recursive nature of its criticism, accept it with a laugh and move on. And this laugh is not the snide, self important laugh that Frédéric Beigbeder’s exceptionally annoying faux-ironic books have. It’s a light, summery laugh. And it’s the same light tone in which the author, towards the end of the book, delvers a critique of masculinity and the way the concept of authorship is designed to buttress and please the male ego. Again, the insight itself is not original. There are libraries full of books on the topic of the way the cult of originality is tied to masculinity and its crises. But the book’s spin on the ideas is fresh and remarkably straightforward and unapologetic. However much I enjoyed the book until the final few pages, seeing and reading its endgame and final twist made me enjoy it even more. The end comes rather suddenly, but that’s just as it should be. As I said in the beginning, this is a well balanced, enjoyable little book. 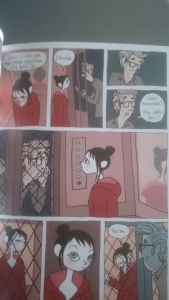 As I wrap things up here, let me come back to the title. For book that’s ultimately so prominently interested in the absurdity of claims for originality, using a surrealist method, authored and distributed by a circle of male writers is already intriguing. The book is written in a way that lets us apply the game of its title in multiple ways, but one particularly interesting way, is the method with which the book folds and unfolds the protagonist’s life according to similar rules, but the elements are replaced in surprising and unexpected ways. At no point could Bagieu’s protagonist have planned to end up where she does, in fact, she could barely have conceived of this possibility. So while the book is entirely contingent, the life contained within is its own exquisite corpse. Really. Cadavre Exquis is a good book. Trust me.