You see marked the inaccurate facts (bottom) and the dubious hiding away of the translator (right) in the Quercus announcement, marring, what is otherwise a joyous occasion.

If you don’t follow me on Twitter, two bits of news regarding soon-top-be-published books may have escaped you. One is the upcoming publication of an English translation of a Mikhai Shishkin novel which is apparently “Shishkin’s Ulysses“. This exciting announcement is only marred by the fact that Quercus calls it Shishkin’s first novel, which it apparently is not, and they chose to squirrel away the translator’s name in a tiny, expandable box in the margins of the page. 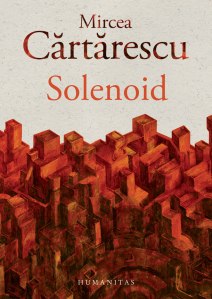 Secondly, and this comes without a link to Twitter, Mircea Cărtărescu’s new novel will be published by Humanitas this month. It is called Solenoid and will be about 850 pages long. That’s right, eight hundred fifty pages. There’s the cover to the right. And given his ascendancy to critical darling in France, Germany and the US, there’s a chance it gets translated quicker than Orbitor did. I don’t think I can get my Romanian to literary reading levels any time soon, but there’s a *chance* someone else might write a review of the book for me.