In a study of French Romantic poetry, John Porter Houston declared in 1969 that “[Baudelaire’s] diabolical Catholicism is […] a mode of sensibility which neither shocks nor has morbid appeal.” It is odd, then, that the same time period saw a big resurgence of fiction and movies on demons and possession, starting with Ira Levin’s Rosemary’s Baby (1967) and the move version (1968), and continuing with William Blatty’s The Exorcist (1971) and its 1973 movie adaptation. Other texts include the 1976 classic The Omen and many more. So what is it that Houston felt was so out of place in Baudelaire’s poetry? The answer has to be that Baudelaire’s sense of evil wasn’t as much religious as it was personal. A sense of guilt, anxiety and fear that made Baudelaire into the “essential modern man,” as Verlaine put it. His demons are far from the ghoulish devil that haunts Blatty’s 12 year old girl. As Edward Kaplan said, the “mal” in Baudelaire’s Fleurs du Mal may not mean “evil” as much as it means afflicted, suffering, fallible and people are not evil but “depraved only in potential and thus responsible for their actions.” In The Case Against Satan, Ray Russell’s 1962 classic novel of demonic possession, we are closer to a Baudelairean sensibility than to the Catholic fetish of all the books and movies that followed in its wake, which were offering demons at best as an allegory for human failures and at worst, as in the work of Catholic conservative Blatty, as an ugly form of literal horror. Ray Russell’s book is, despite having a very weak ending, an exceptional effort, a true masterpiece and the best book I have read this year thus far. There are a couple of weaknesses, as far as some aspects of the writing are concerned, and the final chapter is a full disappointment, but along the way, Russell creates an elegant, smart, ambiguous book about the devil and about the evils that we harbor in ourselves as people and among ourselves as a society.

I admit: when I started coveting the book, I knew nothing about it apart from its title and the beautiful cover design by Penguin Classics. The ghoulish fetish of devils and demons that was launched by Levin and Blatty is one of my favorite genres. A ‘guilty pleasure’ as they say. I was completely surprised by the nuanced and careful book that it turned out to be. This is no fresh or agnostic take on the subject, mind you. The very first sentence, not without some levity and irony, remarks that religion has become “a pious bonbon, so nice, so sweet, so soporific” that it has forgotten about the elements of “dread, blood, awe […] and the element of terror.” There is a fairly serious (and riveting to read) theological argument in the middle of the book (where Baudelaire is invoked), and an almost soppy, mildly dubious final chapter that reduces some of the interesting complexities of the novel in favor of “a pious bonbon” of sorts, which feels more like a cheap narrative solution rather than a statement of faith. Apart from that first sentence, however, the novel isn’t much interested in decrying modern man and his objections to God. Rather, it insists on looking at the spaces where the two intersect, modern man, and the abyss of faith and despair. At its center is not empty demon puppetry, it is the tragedy of a human being and the search for truth. In fact, in many ways, Russell’s sharp way with dialogue and description would not be amiss in a crime novel, nor would you have to change much about the structure. The Case Against Satan does not read like a Catholic novel per se (although I know nothing about the author), merely the novel of a writer not hostile to religion, who uses the traditions, emotions and literary effects that come with this setting. The theological discussion in the middle, centering around the idea of evil and whether one should profess belief in evil as well as good is as much about theology as it is about the faith we have in people around us.

This is not different from a crime novel: having to gouge whether or not we would believe someone’s account of someone else’s guilt. Can a person really be this depraved or should we think the best of everyone? In the theological discussion, a Bishop lectures a priest on his worldly library, citing Baudelaire’s claim in a prose poem [Le Joueur Généreux] that the devil’s finest trick is to persuade us that he doesn’t exist. What’s interesting about that particular citation is that it turns up here and there in Baudelaire’s prose. As with many other ideas, he kept prodding at them throughout his notes and essays. One instance of it surfacing is in the various notes of Mon cœur mis à nu, some of which attack novelist George Sand for not believing in hell, for offering a “God of the Good People,” a God for those who live well and behave well, where there’s no room for the “triste monde engourdi” of Baudelaire’s Tableaux Parisiens. Now here’s where it gets (more?) interesting: Baudelaire describes Sand as being “possessed,” as having been convinced by the devil to offer this vision of a clean and lovely religion where nothing bad happens as long as you do well and behave well. Yet this is exactly what happens in The Case Against Satan. And the reason for bad thing happening to good people is not Satan’s sulphuric influence, it’s human depravity. In a way, all Satan does, both in Baudelaire as well as in the novel, is hide the truth from people of clear conscience and higher standing. If it doesn’t affect us, we don’t have to think about it that hard. All of this, minus Satan and God, would also have happened in a Gothic crime novel, where it would be the insistence of a conscientious detective to really take a long hard look at the facts and at the people involved that breaks a case wide open. And much as in a Gothic mystery, it’s bigotry, and religious, sexual and traditional expectations that bar clear sight. This makes the book to be not just a sibling to mystery novels, but to classic episcopal texts like André Gide’s dramatic La Symphonie Pastorale, which is also a text about blindness, devotion and power.

This case begins with a young priest, Father Gregory Sargent, who takes over a parish. He is visited by a friend, Bishop Crimmings, just as the troubling and mysterious events break loose. These events all center around Susan Garth, a local teenager, who declines to go to Church, and has mysterious seizures, or rather “fits.” Early on, we are made aware of how this vocabulary and this attitude, these basic explanations, how they tie into a social attitude towards women.

Gregory smiled inwardly. It was such a quaint, old-fashioned word, “fits.” In young women, they were often rooted in sexual hysteria.

But unlike the word “hysteria” may lead you to believe, what follows is not a condemnation of women or sex, but rather a celebration of the “wonderful, wild, untamed force” that is sexuality. In fact, Father Gregory sees this permissive attitude towards sexuality as profoundly Catholic – and it’s hard to argue with him, given the hundreds of accounts of ecstatic faith and visions. Indeed it is Gregory himself who makes that connection in a magazine article that he writes on the topic, which contains the assertion that “[a]t the supreme moment, at the highest peak, sexual artistic and religious ecstasy are surprisingly similar.” Gregory is a “heterodox,” young, troubled priest who has a bit of a problem with alcoholism and free thinking. His faith in God is unshakeable, but it is a faith, like that of George Sand, in “le Dieu des bonnes gens,” as the syphilitic French poet put it. The novel (or Satan) does not end up punishing him for his free thinking or his worldliness and his broad reading. All he does is regain a sense of evil. At no point does the book really go into the pageantry of Catholicism. The style is never ornate, the thoughts and descriptions are never ponderous or solemn. This is maybe the biggest surprise: how frequently crisp and sharp the prose is, despite some trappings of genre writing. Russell is incredibly good at using two lines of dialogue to elevate a situation beyond the necessities of plot. When the teenage girl’s father turns to her in anger and says “Now you listen to the Father here. He’ll tell you I’m right.” Russell has the daughter look the priest in the eyes and ask “Is he right, Father?” This simple turn immediately establishes the character of the girl, and introduces the topic: figuring out who’s right, what happened and who to trust. 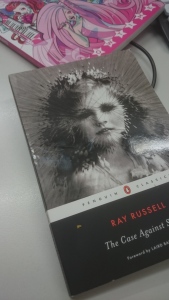 Not on the shortlist of people to trust? Men. Her father beats the girl (“a little slap across the mouth, that’s all”) for infractions, he has the village bigot’s hate for “filth.” his village friend, an anti-Catholic pamphleteer is less interested in the girl’s fate as in his lurid tales of Catholic depravity, where he ties rumors of Catholic pedophilia to medieval torture and the idea of a Black Mass. In fact, this anti-Catholic activist has a surprisingly similar view of Catholicism as The Exorcist’s author Blatty, who is enough of a conservative catholic to have recently petitioned the Pope to force Georgetown University to comply with a set of Catholic rules instated by John Paul II. Ray Russell’s priest and Bishop are not rulebound or insistent on such rules or on a proper catholic appearance. In fact, it is the congregation that raises a bit of a stink in the book when, preoccupied by an exorcism, Father Gregory fails to uphold local customs even for one Sunday. The pressure to conform to rules and regulations is viewed as a burden, unconnected to real faith. In a moment of crisis, overcome by various forces and pressures, Father Gregory breaks down and exclaims “Is it such a sin to have a mind?” And it’s not, the Bishop (and the book) assure him and us. The true darkness in the book is not Satanic, it’s human, and Russell makes excellent use of ambiguities and his sparse but precise descriptions to uphold that ambiguity. While the final chapter is a bit reminiscent of Beyond Belief-style gestures towards the reader, it barely diminishes the skill and achievement of this book. This book is a joy to read and reread, a pleasure far from “guilty.” A tough, smart little book, and a compelling read.

One thought on “Ray Russell: The Case Against Satan”