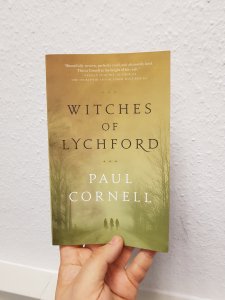 Reading Adorno’s Kulturindustrie, people like to focus on his curmudgeonly complaints about popular culture. My favorite aspect of it has always been the idea that whatever noxious ideology we see displayed in the products of the culture industry are merely magnified versions of ideological tensions that have been part of earlier art all along. The unsubtle, obvious treatment of them in the culture industry merely makes them more visible. Something similar, on a smaller scale, is happening with Paul Cornell’s Witches of Lychford, I think. I have always meant to read a book by Cornell, but never got quite round to it. He’s been writing novels, comic books and scripts for TV, including some very good episodes of Dr. Who. So for some reason, this novella, published by Tor, is my first taste of Cornell on the page, and it’s a curious experience. Cornell writes his story with an extraordinary ease, assembles it from various parts, hints effortlessly at a broader backstory, develops interesting characters in just a handful of expert strokes. It’s quite extraordinary to watch, and that certainly makes the book worth reading. If you like stories about witches taking on elves and evil in a modern small town,it’s hard to imagine a story executed better than this one. What’s more, the book echoes a certain British kind of writing, of the Gaiman and Pratchett variety, at least for me, which has a comforting effect. Yet underneath all that, the book follows a curious discourse about money and power with a somewhat unpleasant cultural history. In this case: structural antisemitism, and it made me worry about many of the books in this tone or genre I had previously enjoyed. It’s Cornell’s excellent craftsmanship that has made certain discourses this visible in this novel or novella, because instead of couching the ideas in story and material, Cornell zeroes in on the more difficult parts of these ideas, because he has to, to create his music from the skeleton of notes that the short form leaves him with. I feel very uncomfortable with this book yet at the same time cannot but admire its execution. Cornell hits all his notes exactly. Honestly, it is books like this that I sometimes want to throw at some of the current literary purveyors of genre, the people coming from literary fiction who stoop to genre fiction, not realizing that genre fiction depends on craft and skill just as literary fiction does, and Paul Cornell demonstrates the mechanics of writing genre literature in this decidedly minor, but absolutely delighful, though poisonous, little book.

Witches of Lychford is creepy, but it’s also funny. It takes all of five pages to firmly place some of the book’s voice in a tradition of light, humorous English fantasy, the genre that was dominated for what felt like a century by Terry Pratchett. Terry Pratchett, with the exception of some very early and some pretty late work, mastered a consistently humane and humorous voice: he created a parallel medieval world, into which he slowly introduced the foibles of modernity, from cinema and rock music, early on, to the postal system, telegraphs, banks and trains later on. His characters are sensible British people, usually men, with sensible, common-sense minds that were disturbed by intrigues, racism and other silliness. In Terry Pratchett’s world, being humane and kind always prevailed in the end, it would always show you the way, even if you were unlucky and died. Pratchett was critical of institutions but generous towards the people in his books. What’s even more interesting is that any careful reader was aware how thin the line was which Pratchett walked. Connecting fantasy races like dwarfs or elves to human racial tensions is difficult, and “common sense” can very quickly be used to excuse lazy thinking. If we’re asking you to include more complicated identities and preferences in the way you chart your world, being a common sense thinker is no excuse to exclude LGBT or people of color from the way your world works. And Pratchett never did that. Pratchett’s characters draw a line, but well-meaning people are always within the bounds. It’s bad actors who are left out: bigoted people for example. There are many examples of this British pastoral, grappling with modernity, but nobody executed it with as much kindness and care as Pratchett, which is his greatest achievement, I think. Second on the list was Pratchett’s skill with language, with moving phrases and objects just outside the reach of easy cognitive access, making our brains do double duty and re-assess things and words taken for granted. The book that Cornell is most likely to have had in mind while writing Witches of Lychford, however, is not a Pratchett novel per se. It is a collaboration between Pratchett and Neil Gaiman, whose work has always been a bit disappointing, but has now also become boring.

That said, Gaiman’s appetite for storytelling in his early work was impressive and while not possessed of Pratchett’s gifts at defamiliarizing objects and language, his work repeated many elements of Pratchett’s, though in a more self-possessed, slightly unkind way. His modern city lacks the possibilities of redemption that Pratchett’s has; his view of modernity and its clash with the British pastoral is much more informed by the (infamous?) ending of Lord of the Rings, with the return to the industrialized Shire. Whereas Pratchett’s work follows many of the beats of the pastoral novel, despite much of it being set in the gigantic metropolis of Ankh-Morpork, Neil Gaiman implies the pastoral by its lack, by the decay, the destruction that modernity hath wrought. That’s not a very interesting topic for a late 20th century writer, and, if you insisted on doing it, one could at least ask for it to be done in an interesting way (Alan Moore, Gaiman’s contemporary, was interested in many of the same themes, but his work is compelling throughout; the difference between Alan Moore’s run on Swamp Thing and Neil Gaiman’s very popular run on The Sandman is instructive here). Cornell’s novel(la) is decidedly written in a post-Gaiman and post-Pratchett environment (there are other writers relevant here, but I’m restricting myself to these two). The echoes to Good Omens, the Pratchett/Gaiman collaboration are loud, but throughout the whole book we find a mixture of various approaches to the light British fantasy dealing with modernity and community. Pratchett could rely on the reader’s awareness of the vast reservoir of characters making up his community, and played with new elements accordingly. Cornell has to do the introduction, background coloration and plot all at the same time, and he pulls it off with aplomb. His main characters are three women, implying the Shakespearean coven of weird sisters, but as it happens, and despite the title, only one of them is a proper witch. A second one is a newly arrived reverend, and the third one runs a magic shop in town, has had a year-long affair with a fairy prince, but is practically an atheist. The title, and the behavior of the women in the novel gives us a sense of female community, unlocking some of the non-obvious meaning of the word “witches.” The small town they all live in is a community too, and in a handful of deft strokes we learn how the three women are part of that community too, with even the new reverend having roots in the town.

You know who doesn’t have roots? The new superstore about to open up. The story of the superstore coming to town has had many many versions, some interesting, as in the underrated NBC sitcom Superstore, some more dull, as in Meg Ryan’s final box office hit Em@il for you. Often, we find a slightly troubling nativist discourse surrounding the arrival of the superstore, but it is rarely as obvious as in Cornell’s novel, where the superstore’s arrival literally means the arrival of Evil itself and the apocalypse. If the store is built, a Sunnydale-like hellmouth will open, and all hell will break loose. A demon is seen throughout the book, testing the boundaries in what feels like a nod to Terry Brooks and the second Shannara novel. God knows. That said, evil here is not the unknown corporate entity, it’s shown in the form of a kind of Satan light who tries to talk the town into building the store. He’s deadly but pretends he’s normal. He bribes the mayor, but tries to influence the town in other ways as well. The depiction of his evil is clearly tainted with the associations of antisemitic tradition. A cosmopolitan outsider threatening the nice people in a small British town? Someone whose evil is in his money (there’s a stack of money he offers as charity and it needs to be burned to ward off a danger late in the novel)? He even paints red marks on the doors of selected townspeople. Phara-oh no. This aspect has always been active at the limits of this British genre, from JRR Tolkien’s complicated relationship to Jewishness, to Corbyn’s devotion to the potatoes and leeks growing on his allotment. The countryside on the one hand, and the complicated, difficult modernity on the other, that is part of Britain’s long history (and dark present) of antisemitic sentiment that crosses party lines. Paul Cornell took a trope, the one of capitalism encroaching on proper British small town/village life, which had always been structurally problematic, and lays bare, unintentionally, I think, some of its foundations. The painted red marks on the doors are the icing on the cake, but really, in his narrative efficiency, he makes most of the elements of the book cohere wonderfully, all of them fitting this scheme. It’s a curious effect, in an overall very uncurious book. Witches of Lychford is comfort food, with a drop of poison.

One thought on “Paul Cornell: Witches of Lychford”