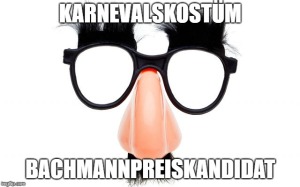 hings are coming to an end. Day Three closed the active portion of the Bachmannpreis with a thoroughly interesting set of texts. Tomorrow prizes will be awarded. At least one of today’s writers should win one, as we have seen the best text of the competition (as well as one of the worst) but we’ll get to that. Meanwhile, here is my summary of Day One. Here is my summary of Day Two. Here is my general post about the event. If you want, you can read all the texts here. The writers today were Jakob Nolte, Stephan Groetzner, Özlem Özgül Dündar and Lennardt Loß.

It was a short day, and not overall as annoying as some previous days – apart from one very bad text, there were two meh texts, one fantastic text, I did not run out of white wine and also I took a nap which is always lovely.

Jakob Nolte, whose novel I’ll review soonish, started the day with a story that seems a bit boring and written slightly sloppily, but upon reading his novel it appears to be written in – his style, I guess? That does not make it good though – it was mostly boring and uninteresting. A couple of crooked metaphors, odd grammatical choices etc. It’s a perfect middle-of-the-road text. Not good enough or bad enough to create excitement, but after day one started with death, and day two started with anal sex, starting day three with a mostly meaningless story about a woman on a beach wasn’t such a bad change of pace. The racial politics of the text were a bit dubious, but so is Nolte’s work generally. His novel uses various people of color to provide meaning and depth to the tale of ethnically German twins born in Norway, which is the whitest possible constellation. In comparison, the story wasn’t that bad.

In a sense the whole day was slowly building to Dündar’s excellent text, as the second writer, Stephan Groetzner, produced a humorous, clever and satiric text about – look, I’m not entirely sure. The text was partially set in Moldova and in Austria, and in its Moldovan sections it sidestepped the usual German tendency of filling these texts up with local color that always feels at best a bit exploitative (see Nolte, Jacob) and at worst a bit racist (see Neft, Anselm). Instead, the text was filled with Austrian terms – from local Austrian myths to Austrian vocabulary – specifically signposting his intentions by having models in Moldova have vegetable based nicknames, all of which were words that only exist in the Austrian variety of German. Groetzner is German, and this rubbed Klaus Kastberger the wrong way – mind you, this is the same Klaus Kastberger, who last year listened to a story about service personnel of color – and urged us to re-learn how to deal with servants.

Thank God the next text was brilliant. Özlem Özgul Dündar presented a brilliant text. A chorus of mothers, echoing various writers from the German tradition (I particularly heard Jelinek, but I am biased) presented the facts and emotions around an unnamed calamity, where neo-fascists burned down a house inhabited by foreigners. The most likely reference is to the 1993 Solingen arson attack, but other elements appear to be referencing other arson attacks that happened at the same time. I say “neo-nazis” but the people involved in the Solingen attack were largely “normal” young men, some with solid background. And in other arson attacks, like the one in Rostock-Lichtenhagen, which happened around the same time, a whole mob joined the attackers. Dündar’s story touches on many of these beats, and also provides a harrowing and moving account of what it feels like to have been there, to have died there, to have survived it. Her textual means were precisely attuned to the needs of the material – and while the text was presented as prose, it showed the author’s background in playwriting and poetry. An enormous text – slighly marred by some of the reception, as some of the judges, in particular Michael Wiederstein, who grew up near SOlingen, appeared to have no great interest in neo-nazis.

There’s a weird thing in Germany where this country has an obsession with Nazis in the period between 1933 and 1945, but attempts to blank out the topic of Nazis after that period, especially Nazis that were born after the war, or even later. That explains why Wiederstein, Mr. No Historical Memory of Events Happening After 1990, invited Lennardt Loß, whose awful, awful text, an excerpt from a very likely lamentably awful novel, is centered around an old Nazi (a “real” Nazi) and someone who was part of the RAF, the left wing terrorism that was particularly active in the 1970s in Germany. There are so many distasteful things about the text, from the dumb use of parallel guilt between someone supporting the RAF and an actual Nazi – but the text itself, with its stilted dialogue, miserable prose and misshapen structure, was almost as offensive on a purely aesthetic level. Loß, with no particular interest in history outside of Wikipedia entries ended day three on a bad note.

I mean it’s a fool’s game to predict the jury but Dündar’s text was so goddamn good that only a moron wouldn’t vote for it to win, but we’ll see.

2 thoughts on “#tddl: Day Three: The Best of Times, The Worst of Times”