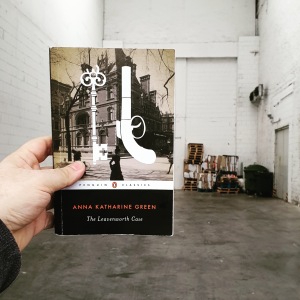 Anne Katherine Green is widely seen as a precursor to modern mystery novels – or one of the first modern mystery novels, depending on how you want to judge eras. Michael Sims’s introduction makes clear how much writers like Arthur Conan Doyle and especially Agatha Christie owe to Green’s work and to her 1878 debut novel The Leavenworth Case in particular. This book’s portly detective, who breaks his case by inviting all suspects into a room and explaining the facts of the case to them is clearly what Christie based her chubby Belgian detective Poirot on. In my experience, many of these “precursor” novels are interesting, often better literature than their more generic offspring, but also sometimes more dull, less concentrated and shaped. If there’s no genre conventions to use and work with, sometimes there’s a bit of Victorian shapelessness to some books, excuse my frank language. But the case of Anne Katherine Green is interesting.

With crime novels, what I as a reader particularly enjoy is reading the environment outside of the plot – issues like class, race, culture, and their reflection in the objects surrounding the plot and characters. Because mystery novels are often epistemologically locked rooms, we as readers enter them as a detective enters a locked room where a murder has happened. We examine the interior, the paneling etc. And while the world of the mystery may seem to roam across broader landscapes, in reality, for the reader, they are all locked rooms, and we enter them suspiciously. This has interesting effects. The author’s implicit biases become part of the narrative and furniture. In influential books like Dorothy Sayers’s debut Whose Body?, the author’s antisemitism becomes part of the structure, part of how we read and understand that novel. I’m not saying anything new, McHale’s disquisition on postmodernism has already sufficiently explained how detective fiction and modernism are connected.

But I found it necessary to explain because of how extraordinarily well made Green’s debut is, and how it appears to address these critiques and ideas. The book is narrated by a Watson type character, a smart person who comes close enough to the mystery’s solution at various points that the resolution can be genuinely surprising. He travels, interviews suspects, collects, saves and presents evidence – and the tone of the novel is extraordinarily melodramatic, designed for the reader to follow this proto-Watson through New York and into the heart of a complex family intrigue. But he never gets a real grip on the solution – that is reserved for the detective. His name is Mr. Gryce and he is introduced like this:

And here let me say that Mr. Gryce, the detective, was not the thin, wiry individual with the piercing eye you are doubtless expecting to see. On the contrary, Mr. Gryce was a portly, comfortable personage with an eye that never pierced, that did not even rest on you. If it rested anywhere, it was always on some insignificant object in the vicinity, some vase, ink-stand, book, or button. These things he would seem to take into his confidence, make the repositories of his conclusions; but as for you—you might as well be the steeple on Trinity Church, for all connection you ever appeared to have with him or his thoughts. At present, then, Mr. Gryce was, as I have already suggested, on intimate terms with the door-knob.

The first sentence, as Sims notes, is a reference to Wilkie Collins’s detective Sergeant Cuff from the 1868 novel The Moonstone, who is described as having eyes which “had a very disconcerting trick, when they encountered your eyes, of looking as if they expected something more from you than you were aware of yourself.” The psychologist detective is its own tradition, but the detective who reads and interprets his environment is a different – and much more interesting – one, in my opinion. Green’s Mr. Gryce is almost a parody of these characters, but appearing long before them – his obsession of not looking into your eyes but carefully observing objects, things, appearances, is stressed more than once in the novel.

This makes him the perfect foil for the protagonist and his melodrama which is almost exclusively focused on psychology, on talking to people, trying to understand them, trying to intuit them. Detective fiction has more than once served as an analog for literary criticism, but this novel, curiously, long before the advent of academic literary New Criticism, offers a powerful and convincing rejection of speculative psychology. What matters are facts – and context, and plausibility. From Peter Szondi, we learn that an interpretation needs to be consistent, and so Mr. Gryce solves his case because he notes that of all the evidence he found, “the chain was complete, the links were fastened, but one link was of a different size and material from the rest and in this argued a break in the chain.” So he ends up offering a Poirot-esque confrontation that leads to a confession.

Mr. Gryce is not an unfathomable genius like Sherlock Holmes – and maybe in this the voice of a female writer becomes clearer. There’s no fetish of masculine genius here – Gryce is led by the facts and the quality of his analysis against his intuitions, and is in the end surprised by the confession. Usually the Watson character is the reader analog – he is our representation in the story. We’re smart but not that smart, observant, but not that observant. But The Leavenworth Case recalibrates this – the Watson character is there to show us the world, but our real analog is Mr. Gryce. We feel with Green’s Watson-like character, and we follow him on his adventure, but as readers thinking through the story, we are more like Mr. Gryce. We create a chain of evidence, and we don’t get all the way there – but neither does Mr. Gryce. The unpleasant celebration of the inexplicable, beautiful genius of Sherlock Holmes, sometimes offered with evidence that was not visible to us as readers, is undercut here. He is encouraging: when the narrator finds a piece of evidence, Gryce tells him: “don’t show it to me. Study it yourself and tell me what you think of it.”

Anne Katherine Greene wrote this novel over several years, pushing herself to finish it, publishing it finally to great success. She married a younger man and actor who later became a famous designer, but she was the primary breadwinner. It would seem counterintuitive then that Green was not a feminist, and in fact spoke out against suffrage in 1917, but here, as with writers like Mary McCarthy, the work itself is more complex. “[G]etting a wife,” we learn, is “the same as (…) acquiring any other species of property.” But in the novel, it is the female characters who plot, who shift things around, who cloud the waters, and men who have to try to hang on to this wild ride. In fact that quote is from a conversation where a man is trying to hang on to the facts of a contract in a situation where life has long made other plans. There is a malleability to this world, a kindness and a depth to its objects that justifies looking at them closer – and though many aspects of The Leavenworth Case became formative for the genre of modern mystery novels, one feels a bit miffed that Sherlock Holmes, who first turned up ten whole years later, has had so much influence on mystery fiction. Everybody in Greene’s novel loves, admires, fears and thinks – Sherlock just sneers. I can’t help but feel we need more of the former and less of the latter.