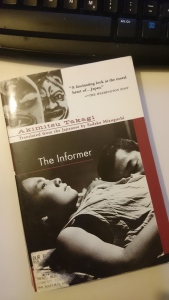 When I started this book I was not aware that The Informer is a very traditional crime novel. I somehow ended up reading it on a recommendation and not until about halfway through the novel did I notice what I was reading. That’s not just because I am slow of mind: the book’s devotion to the genre of the mystery novel doesn’t really surface until about halfway through. The first half of the novel could be part of all kinds of books; there is a distinct sense of gears being shifted after a crucial part of the plot is reached. Another thing I didn’t know until I typed in the bibliographic info on the top right of this review is the age of the book. 1965 was a long time ago, and usually, crime novels which are this old tend to be pretty obviously old. When I reviewed Ed McBain’s 1956 novel Cop Hater, its age was part of the reason this book was maybe less impressive for me than for its readers back in the 1950s. Slang, references and badly aged forensic methodology all dragged on the book. This is not the case here, and I suspect that it is the Japanese culture and my lack of in-depth knowledge of history and culture of post-war Japan that made me overlook the book’s true age. Another factor may be the fact that the book’s allegiance, despite its contemporary setting, is not to modern police procedurals but to the classic detective novel, in particular to the Father Brown stories of GK Chesterton. There is a real police investigation, a noir web of intrigue, sex, murder and desperation – but the basic beats of the novel don’t depend on any of that. Ultimately, this is what makes the book, despite its very slow beginning, such a satisfying read, if you like this sort of thing. Takagi is very transparently not interested in murder or the way we discover the identity of murderers, but in ideas of love and loyalty, of guilt and, Chesterton’s primary theme, of deception and faith.

I will admit: as a reader who lacks the necessary background, many of the topical references that the book’s first half leans so heavily on, are completely lost to me. There is a weight, a historical and moral weight, accorded to the way economical concerns invade the moral fiber of Japanese society. The first half of the book introduces the protagonist, who, after a momentous stock crash, has lost everything and is now working a small job for a small salary, barely making do. The description of the greed of brokers that precipitated this crash should be eerily familiar to anyone who has followed the debates and explanations of our own stock crash about a decade ago. And then, as now, failure and disaster does not cure people of greed, and it doesn’t take very long for our protagonist, whose voice is full of self pity, and extremely hard to bear, to get ensnared in another scheme, this time he’s trying to do some industrial espionage (with risky brokering on the side). This whole plot develops very slowly, with additional lanes opened for a few tense sexual encounters. Our protagonist, despite not being necessarily the sharpest knife in the drawer and monumentally unsuccessful as a business man, has a surprising talent with making women fall in love with him, but as the plot thickens, it starts to look as if he’s juggling too many balls at the same time until a murder makes his life crumble all around him. This is basically the first half of the novel which we experience exclusively from the protagonist’s point of view and it could have been part of a novel of Japanese society, of the Franzen/Trollope variety, or it could have led into a very dark noir kind of novel. Instead, as a police inspector and two prosecutors enter the fray, the novel suddenly splinters into a multitude of voices and points of view, and, very quickly, we find ourselves in a very classic detective novel, interrupted only by the occasional chapters from the protagonist’s point of view which offer some continuity with the first half.

It may not be clear from my dubious skills of describing novels, but the second half of the book is much better, much more enjoyable than the first half. The undertaking of mirroring the developments in postwar Japanese society and the devastation these developments have wrought in the soul of one hapless, greedy Japanese man takes genuine literary skill – a skill the author does not, I think, possess, although the spotty translation, which sometimes reaches for strange locutions and idioms, certainly does not help matters. There are a few extraordinary observations, the most intriguing one involving the way selling massaging tools can help a stock broker get the inside track on a company’s financial health. The picture painted is of a whole set of defeated, tired managers, overwhelmed by the financial crisis, whose wish for comfort is a sign of having given up on success. In this one observation, Takagi manages both to sum up the joyless business landscape after a period of financial devastation – and also offer a remarkably uncritical condemnation of what his character calls “laziness.” Success in business and a longing for comfort do not fit. You have to choose one or the other, which is a pretty harsh assessment, all things considered. Mostly, however, the book’s topical criticism does not make for exciting reading. By contrast, the book’s taut handling of the murder intrigue, with its twists and turns, hiding and exposing just the right amount of information, is truly well done. As readers, we follow the author wherever he leads us, and even if we guess the final reveal fairly early, this does not make the book any less suspenseful. It took me a long time to get through the first half of the novel, with its tedious descriptions and its exploration of the uneventful inner life of a man who doesn’t have much of an inner life, while I just flew through the book’s second half. Moreover, for having such a dull male protagonist, the book’s second half offers us a broad range of female characters, who are either smarter, or more compassionate, more moral or more clever than many of the book’s male characters.

The book’s concern with femininity, and its contradictory treatment of its women is, finally, another reason to give it a whirl. Early in the novel, a character says “I don’t know if it’s good or wicked of me, acting like this. If we were in some other country, it probably wouldn’t look so bad, but here in Japan it must seem terrible, especially to older people. Poor me – I might yet be labeled a bad woman….” The wicked thing she does it be more active, lively, act out her thoughts, push people to do a thing she believes is right. Another character similarly knows that society judges her for sleeping with a man before marriage, living alone. And a third character is driven to suicide by a situation that wouldn’t be as oppressive if social pressure wasn’t as high. That death is a double edged sword, however. It is never quite clear whether the novel approves of the free thinking some of its female characters exhibit. Some characters are undercut in hindsight, some are killed, as of to punish them, some are just miserable. The most consistent moral throughline of the book still leads through its male characters, and all final insights and beneficial actions are undertaken by men, as well. And yet, the social situation of a generation that is not entirely pre/mid-war and not entirely post-war (“Your generation […] doesn’t belong anywhere.” a character explains) is mirrored in the author’s own inconclusive way of seeing female freedoms and male traditions. The novel appears to be critical of a certain brand of free thinking, but at the same time, it displays an awareness for the profoundly unfair way, for example, marriage, love and sex plays out for men and women. Women are practically sold into marriages whereas men have close to absolute freedom.

You’ll notice that I have, in discussing the social criticism, barely mentioned the Japanese setting. In part, this is because, as I noted earlier, I am profoundly ignorant of it. But I could have connected some of it to books I already reviewed like Ayako. However, the social conservatism of it doesn’t strike me as any different from the social conservatism of, say, American or German novels published in the early 1960s, and I am wary of overly exoticizing the novel when it doesn’t really need it. There are aspects to it that strike me as mostly or completely uniquely Japanese, such as the company structure, the deference for hierarchy and age, and some discussions of honor (for example, the protagonist wasn’t fired from his company, he resigned as a matter of honor because he caused too many losses to the company), but none of them are really central for the novel. I keep bringing up Chesterton, without managing to offer evidence without spoiling the book, but for me, this reference settled early in the second half and never really left my brain. Mostly, think, it’s the underlying deception that precipitates all the book’s murder and mayhem. The nature of the deception is, I think, a cruel kind of evil, but it isn’t some vague perversion or, conversely, some metaphysical evil. It’s the awfulness of human beings, the things human beings will do to each other for money or revenge. Chesterton’s Father Brown would look at these deceptions with a kind of sad resignation, clear-eyed, but sad. I think that is how we leave the novel, and its final revelations, as well. Not shocked or thrilled or titillated, but disappointed in the things people do to each other and a bit sad. “Every friendship, however genuine it might seem, must have a shady side to it,” a character says at the end. One wishes, ultimately, that Takagi was a better writer and Mizuguchi was a better translator, but the book’s core is solid and the book succeeds despite everything.

As always, if you feel like supporting this blog, there is a “Donate” button on the left and this link RIGHT HERE.

If you liked this, tell me. If you hated it, even better. Send me comments, requests or suggestions either below or via email (cf. my About page) or to my twitter.)