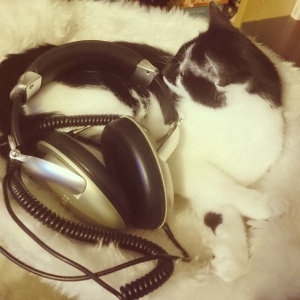 So after having had to do without my primary computer for a few weeks, I managed to switch it on last night for a while and the first thing I did was to open iTunes and download the most recent episodes of all the Podcasts I was subscribed to. As I saw the number of episodes that were being downloaded climb from one to ten to (in the end) 72, I was moved to contemplate the space I accord to podcasts in my daily life. So I decided to offer a few recommendations. I am subscribed to way too many different podcasts but I will recommend a small handful that will not take up too much of your time, but that WILL provide a nice distraction on your car ride or during a work out. I primarily use podcasts so I don’t have to hear my own thoughts, but even for normal people, podcasts are a nice thing to have.

1.  So the first thing to know that if you want variety, the best bet is one of the millions of interview based podcasts. All 3 of the podcasts that I’m going to list are very uneven depending on their guest, but they do have very specific strengths that come out almost always.

2. The second group of recommendations is just one Podcast collective. That collective is Radiotopia. Every single Radiotopia podcast is excellent. Excellent. Eminently worth your time. The thing that unites all of them is a mostly short runtime of roughly 20 minutes, a creator/host who is deeply invested in the format, and high quality content. Their best podcast is 99% Invisible, a design-based podcast by Roman Mars who’s also the driving force behind the whole Radiotopia enterprise. There is no other podcast that I have linked so many times to people. Like this episode about nuclear waste, or this episode about the criminalization of jaywalking, or this episode about the strange rebuilding of Warsaw. If you came to this blog post looking for recommendations, trust me on this. Other podcasts are Song Exploder, which is the podcast with the shortest episodes on this list. Every episode looks at the creation of a specific song. There’s no banter, no need to fill minutes. There’s about 5-10 Minutes of the band or artist or producer discussing various parts of the song and at the end, you can hear the song. It’s short, inspired and absolutely lovely. Trust me. You want to add this. Criminal is a podcast to scratch your Serial/Making a Murderer itch. Listen to the extraordinary and mildly disturbing recent episode The Agreement for a taste.  There is The Heart, a podcast about sex and love, Fugitive Waves, a fantastic podcast about…everything? Really, they are all good. Listen to one or two episodes from all Radiotopia podcasts and see which ones you particularly enjoy. I can vouch for all of them except Mortified which sounds too much like other podcasts I have not enjoyed all that much despite their fame (like The Moth). To sum up: Radiotopia in general and 99% Invisible in particular. Go forth and listen.

3. The third group are what I call the science podcasts. Given that so-called nerds and geeks have seized the medium of the podcast it’s no wonder that science based ones rank among the most popular and generally excellent varieties. I’m subscribed to about ten of these but I’ll recommend 3 here.

4. And the fourth and final group are odds and ends. I’ll mention 6-8 of my favorite podcasts from various networks and on various topics.

Bonus: Bookbabble. How are you not listening to that yet? Shame on you. Mend your ways and subscribe.

There are whole swathes of podcasts I have not added. There’s languages: I listen to a very reasonable German podcast (Kulturjournal), a very good French one (La Fabrique de l’Histoire) and a lovely Russian one (Ночной дневник) but I would honestly welcome recommendationa in all three of those languages. And there’s sports. Among my most frequently updated podcasts are at least 10 that deal with my ungodly obsession for various sports. If you want recommendations for those, ask me in the comments or on Twitter. Meanwhile, I’m off drowning out my thoughts again.