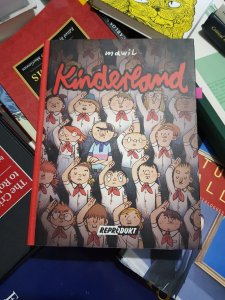 The Western discourse on Socialist literature has always been ideological in the sense that we as readers expected something from the literature coming out of the Soviet bloc, and imbued that with literary value. This has at times led to the promotion of mediocre but very critical writers. Wolf Biermann is one of them, and the charade that the continued literary life of Monika Maron is should be filed in the same category. Sometimes, the way these expectations are dealt with is entertaining: I can highly recommend reading Heiner Müller interviews from his middle period of work – he is constantly, as a writer known to be at odds with the leaders of the GDR cultural establishment, prodded to please say something critical, and instead he goes on and on about the problems with capitalism, savagely critical of leftwing “symbolic” criticism and endorsing violent change. Another example is Rummelplatz, a novel that was not allowed to be published in the GDR, and the rejection of which had sent its writer, Werner Bräunig, into an early grave. The rejected manuscript is literally a museum piece now: in the German History Museum in Bonn, it is presented among other articles of “proof” of socialist repression. As I point out in my review on the blog, Rummelplatz is an odd candidate for such a hallowed spot in the museum of Why Socialism Is Evil: Bräunig’s novel explicitly and at length points to the many acts of exploitation that happened in West Germany and how East Germany had risen from a couple of potato fields to an industrial nation, against the threat of Western sabotage. It’s critical of some mechanisms of the GDR without endorsing the alternative. Like many writers of his time, like Müller or Wolf, Bräunig favored a change in the system, rather than a change of system. These books, half in and half out of discourses on socialism, are in my opinion the most interesting of the bunch. But it is a careful balancing act that isn’t so easy to pull off. Mawil’s thick brick of a graphic novel, Kinderland (named, I think, after this 1986 song), doesn’t quite manage this. That said, it’s certainly a more worthwhile addition to the body of literature about the GDR than many widely praised fictional statements on Why Socialism Is Evil.

Kinderland slips in and out of discourses. It is a story of life in the last years of a country heading towards dissolution. There are different books in it: a paint-by-numbers book about socialism as fighting dissent and being in favor of conformity, a book about growing up in the GDR, a book about isolation and growing up abandoned, a book, strangely, about alcoholism, and finally, an exciting tale of a boy who discovers his table tennis talents and mounts a school-wide table tennis tournament. Not all of these books fit extremely well together, and when I read it for the first time, I felt let down and disappointed. But upon rereading the book a few times, I have found it to be quite interesting. The combination of disparate elements works in its favor – life at the tail end of the GDR was confusing and complicated, as I, who started elementary school in the GDR and ended it in a united Germany, can personally attest. The book’s greatest strength is its careful attention to details. The slang, words, objects, the rhythm of life under the socialist regime are written with the vividness of memory, and I think it is the exactness of the book that leads to some of its complications and problems. I cannot vouch for most of it – but there’s a curious echo in my reader’s memory here. As a boy I read many of the books in my father’s library. And since my father lost his reading appetite when he became an adult, those books were largely young adult books, some of them exciting tales about being a teenager in the GDR. In my head, when I read Kinderland, the details I knew about through family stories, the details I personally observed, and the details I remembered from YA books written for GDR youth come together to create a feeling of verisimilitude. And one wonders how much of the plot and structure of Mawil’s book can be tied to his own reading, and his own indirect knowledge.

Mawil’s art is the real deal – he manages to slow down and speed up his story at will, provide a genuinely exciting table tennis game even for people who have never played or followed a single complete game of table tennis. As an artist he is not necessarily what I would call an original artist – most of his techniques can be attributed to examples from Belgian comics to Chris Ware and in particular Seth, though it’s the latter association that makes me think the art’s roots are a bit deeper, like Seth’s own are. But if you have read Seth, and Ware, and maybe Rube Goldberg, you’re not surprised by anything the book does – but it is entertaining. Mawil has full control of moods, speed, and humor in a way that I always greatly enjoy in comic books. He also uses the art to tease the reader with possibilities. The story, ultimately, is a low key story, which ends in a low key way, with two boys trying to seal a friendship. But it is presented to us immediately under two different auspices: the cover, with a sea of pioneer-blouse wearing kids and one dissenter in their midst, suggests that the story is about political dissent. The first page on the other hand presents a number of toys and childhood objects that anyone who grew up in the GDR can readily identify – there’s no other function of these panels than to signal to the reader a sense of nostalgia – or ostalgia, as it is often called. Neither impression is true for the direction the novel will take. All the working class misery, all the many, many characters who are clearly alcoholics (alcoholism was specifically a scourge of the GDR), that precludes a safe nostalgic reading. Similarly, a character in the book, a conformist girl called “Angela Werkel” is clearly an allusion to Angela Merkel, Germany’s chancellor. It’s not true – in the sense that Mawil, as a boy, did not meet Merkel who was much older at the time of the events described. But the inclusion of someone who did well under socialism, and did very well after socialism, who is shown to be intensely conformist, but also kind-hearted, is a suggestion that what really counted was not the content of one’s party allegiance but the content of one’s heart, bland as that may sound.

The main character, called Mirco Watzke (Mawil’s real name is Markus Witzel), is also one of the least interesting ones. His childish excitement, anger, frustration and happiness is well rendered, but is drowned in all the typical generic discourses on childhood which Mawil makes no attempt to break or criticize. The really fascinating character is a boy named Thorsten. He is the boy on the cover who does not wear the uniform (Mirko Watzke is the boy to his right). He’s not ideologically opposed to the GDR, he’s just a misfit. His father has left the family to pursue worldly riches in West Germany, which has turned his mother into an alcoholic. He basically lives alone, and his abrasive character means he has difficulties making friends. It is hard not to see the disillusioned, broken teenagers in Clemens Meyer’s novels about the period after reunification (very well translated by Katy Derbyshire) in Thorsten’s future. In fact, one could argue that the whole book takes on Thorsten’s shape. The contradictions in his character and the contradictions in this wild ride of a novel seem to fit. The biggest weakness of the book is Mawil’s apparent decision not to jettision his autobiographically inspired protagonist. The genre of coming of age book, where the protagonist plays straight man, and mostly narrator and observer to a wild friend or acquaintance, would have been a better fit for the material in this book. But then one has to wonder about the politics of writing this book. In a world where a novel of not-quite-dissident writing gets a spot in a museum, where the memory of the not-so-distant past is intensely politicised, Mawil’s stops and starts.