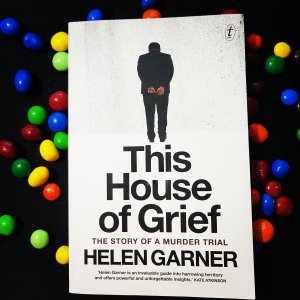 I had previously only read one other book by Helen Garner – and it was a novel. This House of Grief is a nonfiction account of a murder trial. And it’s so damn good that I now own three more books by Garner. I will admit, I have a soft spot for true crime and have spent too much time looking up details and backgrounds for all the various true crime accounts I have consumed – Podcasts, books, Netflix TV shows….but never once during or after reading Garner’s story was I tempted to draw in outside sources to fill in the picture. And that’s because this book lives somewhere outside of these concerns with crime and prurient interest. Somehow, Garner succeeded in crafting a mournful book about a murderer that exists on a different plane. This is a story about a man who murdered his children, yes, but it’s also the story of an elderly novelist and journalist who attends his trial, who tries to wrap her mind around this crime, around the man accused of it, and the doomed dance of his defender in court. Garner pays attention to voice and gestures, to faces and bodies, creating before our eyes a powerful portrait of an instance of humanity having failed – for whatever reason.

The father who killed his children never admits to his deeds, and so Garner – and we as readers – are never offered an explanation, there’s nothing relieving us from the darkness at the heart of this criminal act. There’s no Mindhunters-like psychological framing and explanation, no confession of passions run amuck. The prosecutor, Garner herself and some other people who have been drawn into the maelstrom of this trial, they all offer some small explanations. Frustration, jealousy, sadness, anger. These are all possibilities, but what unites them all is the shocking way in which they are insufficient to explain what happened here. None of these seem to be enough to explain why a man would drown his children that he appeared to love very much. And Garner isn’t alone watching this trial. She brings along a teenager who has the requisite time, and now and then she also talks to lawyer friends of hers. This constant dialogue with others creates a kind of chorus of people none of which have any doubt of the father’s guilt. He is clearly, obviously guilty, he smells of guilt to Garner – and thus to us. And all of it is told in a language that is almost without flaw. Elegant, clear, Garner summons an army of short sentences and phrases, only occasionally letting the spill all over the page in small poetic images and the author’s acute distress. This trial – and the book- must have been hard to live with. And we are fortunate that Garner persevered.

In this time of #metoo and the crumbling façade of violent and mediocre masculinity, this is a curious time to be writing this book. True, it came out in 2014, before the Zeitgeist shifted so significantly in 2017 – but still. I have not read Garner’s other nonfiction books, but from some overviews I saw that The First Stone, Garner’s 1995 study of a sexual harassment case, garnered the kind of critical attention that makes me suspect its implied thesis hews rather close to the one that Katie Roiphe centered in her own book on a similar topic, the now infamous The Morning After. Whenever Roiphe puts pen to paper these days to comment on sexual harassment, there’s a chorus from twitter, blogs and many such sources, reminding all of us that this is the author of The Morning After and thus we should be disregarding her writings and opinions. And it’s true that much of that book is unpleasant to read and distorted a very real problem. If Garner’s The First Stone went into a similar direction, it seems fortunate that writing the book didn’t tarnish her reputation. And in many ways, This House of Grief represents a kind of about-face, a shift in emphasis.

Garner’s book never leaves us in doubt: this man is guilty. And his guilt is connected to things Garner never really manages to suss out. The opaque horror at the core of the book is, however, insistently connected to various failures of masculinity, to male anxiety, to masculine violence and dread. This is where all of the explanations, however incomplete, inefficient, or unlikely they may be, lead. If this was a novel, you’d consider it overdetermined, too constructed, too constricted by the author’s will to make it all cohere. But here we are. From the unlikely name of the accused, Robert Farquharson, to the helpless dance of his defender and the wise voice of Garner’s teenage companion, it all coheres, in a compelling but distressing way. One of Garner’s epigraphs to the book quotes a lawyer “walking past,” who says that “[Robert Farquharson] can’t possibly have done it. But there’s no other explanation.” We get small snippets of crime scene investigations, of small doubts offered, but they are drowned in the better sense that the prosecution’s case makes. That man murdered his children – in part because he was a man and couldn’t deal with what was expected of him.

Gender is woven throughout the book. Later in the book we learn of the endless devotion shown to Farquharson by his sisters, and even, to a point, by his ex wife. We learn of the pitfalls of this kind of devotion, but mainly, we are explained, often implicitly, of the way Robert Farquharson fails to deal with his failures. Financially on the cliffs, left by his wife for the constructor who was employed by them, with severely reduced contact to his children, Farquharson doesn’t do anything sensible, he doesn’t pick himself up, he doesn’t move on, he doesn’t try other projects, he wallows in his failures. The trial specifically notes, absent any admission or confession by Farquharson himself, that driving a shabby old car would naturally feel emasculating and humiliating, an assumption that most people involved in the case seem to share. Garner includes a curious discussion of masculine attractiveness in it:

“But, having recently watched a bunch of blokes pour a concrete slab in my own backyard, I was equipped to imagine the effect of this sight in Cindy Farquarson’s stifling situation. A concrete pour is a dramatic process. It demands skill, speed, strength, and the confident handling of machinery; and it is so intensely, symbolically masculine that every woman and boy in the vicinity is drawn to it in excited respect. Spellbound on the back veranda between my two grandsons, I remembered Camille Paglia’s coat-trailing remark that if women were running the world, we’d still be living in grass huts.”

If Roiphe is a bit infamous among progressives, Paglia has, since publishing her (inexplicably) still-read tome on literature that’s short on analysis and long on caustic diatribes, become a veritable troll, intensely supportive of fringe anti-feminist opinions. Garner’s inclusion of Paglia here is curious. It makes no contextual sense that she’d cite Paglia as an authority here. Instead, what we are offered is a complicated tableau of masculinity, feminity and attraction that is presented as contradictory.

Farquharson maintains to the end, and one assumes, to this day, that what happened was an accident, that he blacked out due to a freak medical condition. We, however, stare at his horrible deeds, and try to understand them from the explanations offered, all of which somehow come back to notions of injured manhood. There’s a specific, unpleasant kind of violence that tends to accompany people socialized as male, at least in our societies, our kind of socialization. Helen Garner, as an observer in the courtroom, and her teenage friend, serves as a kind of Greek chorus to all this. Woeful cries, exclamations, repetitions. In a sense we don’t need to be told what Farquharson’s fault, his ἁμαρτία is. It is implied in the darkness under the words, under every gesture. The very inexplicability of it, which rubs up against the overall very simple case, the amplitude of evidence feeds this sense. Elisabeth Roudinesco, in an early chapter of La Part Obscure de Nous-Mêmes, points to the shifting explanations of what the “perverted” people are – how do we contextualize their missteps. And, she says, as divine explanations (with demons preying on those weak of faith, found themselves on the retreat, the answers came slower, and with more contradictions. Later chapters invoking Peter Singer point to how complicated, really, these explanations have become. In This House of Grief, on the one hand, we are given an extremely simple situation, a biblical scenario, if you will, but the father’s silence, and the terror that always comes with these stark, hard to understand these crimes, these inhumane human decisions hark back to Roudinesco’s discussion of the dark parts within us. Greed, anger, these are easy to grasp, but what happened in Farquharson’s head, in his car, seems more easily explained with demons, the devil, schizophrenia, one of these. But there are no demons, there’s no devil and Farquharson was sound of mind. So what now?

As it happens, Garner has a horrible little theory of her own, which the trial judge and defense lawyer both remove from the courtroom: “the long black thread of Farquharson’s ‘depression’.” It is not to be discussed, it is not to be presented to a jury. Much of the book is spent watching Garner watch the defense fail, in a kind of replication of Farquharson’s previous failures:

“the final fortnight of evidence was like watching, in ghastly slow motion, a man slither down the face of a cliff. Sometimes his shirt would snag on a protruding branch, or his fall would be arrested by a tiny ledge, a fragile outcrop; but the fabric would stretch and snap, the narrow shelf would crumble, and down he would go again, feet first, eyes wide open, arms outstretched into the void.”

But while watching this cascade of failures, by Farquharson, by his lawyer, by his defense, his humanity, Garner reaches into the bag of possibilities, and draws out the idea of attempted suicide. Taking his children with him, Farquharson attempted to remove his presence from the world, remove his failure, his inadequacy, and commit murder as a horrible way to wipe the slate completely clean. This idea Garner mentions fairly early, but she doesn’t let go of it. The only explanation she can think of to escape the horror of unexplainable murder is a more graspable, more understandable murder-suicide. There are books on this. This we can understand, this we have studied. Ultimately, it’s unimportant whether Garner is right. This House of Grief is only partially about Farquharson’s trial. It is about a writer trying to deal with something inexplicable and to contain it in clean, safe language. It is an enormous book.