This is very likely my last review of the year but I just couldn’t let the year on my blog end with that terrible Chapman novel, so I picked an interesting looking book from my TBR stack and read it, and am sitting down here, on a Christmas morning somewhere on the outskirts of Bucharest, writing this review. And I am very glad I made this choice.

I had not heard of the writer before, but it’s a name I won’t soon forget. Yuri Herrera has, so far, written three short novels, the second of which, Signs Preceding The End of The World, has now found its way into English, in a translation that I found fantastic, published by And Other Stories. I don’t naturally know how close Dillman kept to the text and how much of the original is found in this English version, but she found a language that is strong, unique and fits the text, its story and its quirks to a t, which makes me think she did a good job. The book itself is a rich story that feeds equally off myth and realism, with its closest sibling (in my limited reading of latino literature) not the postmodernism of Roberto Bolaño, despite the thematic similarities especially with 2666; instead, the book that most came to mind is the one Mexican masterpiece pretty much everyone has read in one translation or another: Juan Rulfo’s spellbinding novel Pedro Páramo. It also reminded me of something odd in amazon’s current TV show Narcos, a slightly unpleasant American rewriting of recent Columbian history. It starts off with a disquisition on magical realism, but, as far as I have seen the show, does not offer any of it to its viewers, instead it’s a mixture of docudrama and realistic action. In this context, the way Herrera’s novel digs into myth, into the layers between life and death, consciousness and dream, appeared even more stark to me. But even without the contrast, this novel is captivating. After I finished it, I found it hard to believe that it was as short as it is. In it, we go to hell and back, we see how war and poverty and warp and hollow people out, and how threadbare, ultimately, the connection is that we have to our homes, no matter how strongly felt it might have been. Herrera discusses, in other sections, the border issues between Mexico and the US, offers a suggestion involving a broader sense of home and identity and takes a long, hard look at fear and necessity. This is very clearly among the best novels I have read all year and probably in the last 5 years, too. Herrera’s skill as a writer is beyond remarkable and Lisa Dillman’s translation is similarly good. Do yourself a favor and read this book. This is the most direct, unguarded recommendation I have given out all year. Go, now.

Yuri Herrera has so far written three novels. All three deal in some way with the drug traffic, and the problems in Mexico that arise from it. All three decline to offer a stark realism, although the third one comes closest. All three play with the idea of narrative, of writing. There is a sense of a grasping for a national literature that both deals with the scourge of drug trafficking and transcends it. Trabajos del reino, the first book, is equipped with a protagonist who is a poet or singer, who slowly enters the ranks of power. Thus, Herrera can offer his readers a variant on that old Mexican genre: the dictatorship novel. These books, from García Márquez to Roa Bastos, Miguel Asturias and Ramón del Valle-Inclán, have long been considered a central part of the canon of latino literature, part of the way that literature has related to issues of nationbuilding. To speak with Lyotard, if I may, is it possible to say that over the decades since Asturias and Valle-Inclán, all these petits récits have added up to fairly large and grand narratives themselves, somewhere between the great European ideologies, much as its great proponents, from García Márquez to Vargas Llosa, have to be, I think, described as being somewhere in between those ideologies. Herrera’s book, by dropping the focus from a statesman, even a despotic one, to a drug kingpin, offers critical commentary on this genre, as he, at the same time, I think, attempts to use its strengths and implications for a putative récit about Mexico. The third novel’s protagonist is a lawyer and its focus is even narrower and local, and it involves a writing of history and law that needs lawyers not poets or singers. In between those two books is Signs Preceding The End of The World. It starts off as the smallest of books: the realistically told tale of Makina, a young woman who sets out to bring her brother home. In order to be able to cross the border, she strikes a deal with local drug kingpins whose reach extends far into the US and whose tales of a mythical heritage beyond the border were the original incentive for her brother to leave home. She carries with her a message from her mother and a package from the kingpin. The book is told in the third person, from the young woman’s point of view. We are never privy to all her thoughts, the effect is more that of a chorus, telling us about the big beats in her emotions as they relate to the events around her.

The rhythm of the novel fits that impression, with an almost stakkato-like sequence of sentences, although this is no formal system. Sentences vary in length and melody, but the beats keep recurring. This delivery is significant because it takes us out of a too realistic reading of the events and draws attention to all the instances where the novel addresses its own form or the question of narration in general. Even within the constraints of a very short novel that has a long story to tell, Herrera’s focus never wavers when it comes to these issues. When people speak, Makina almost always reports to us precisely observed details about how they speak, how their manner of speech reflects on their persona or the situation. Again and again, stories and observations come back to this. One story, on the surface meant to show how people can change once they come back home from a longer stay in the United States, is, at the same time, a story about communication, quite literally, about speech, about signals and many more details like that. Late in the novel, writing is used as a weapon of defense against institutional racism, names are exchanged and truth is repeatedly debated. I say it’s striking, but it’s more than that. It’s also a continuation of Herrera’s themes, but instead of having one singer tell a ballad of the drug life, this is a kind of decentralized story. Told, yes, by one person, but the novel spreads out all the speech and the awareness of it to all members of the chain that leads Makina from her village to where she ends up. As my evasive formulations show, I am loath to reveal details about what happens exactly, because I don’t want to take away the joy of discovering the book from any of the people who are reading this review, but I will reveal that it is indeed a quest, and one where the Hobbits do not return to the Shire. The form of the quest focuses all the elements of speech, gives them shape and meaning and coherence. All the urgency that spurns Makina, it transfers to the discussions of orality and narrative and writing. One issue that recurs again and again is the question of language. Whenever someone speaks for the first time, the novel makes sure we know whether its “anglo tongue” or “latino tongue” – but its linguistic world view is far from a simple binary. At some point, roughly halfway through the book, Makina describes the speech of the locals as “a shrewd metamorphosis.” 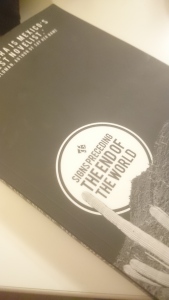 In general, despite the border being obviously the most apparent metaphor, the novel doesn’t care much for sharp distinctions. People are almost what they are. Friends are sometimes not quite friends, enemies not quite enemies, and the border that can destroy a young man is sometimes not the border between the US and Mexico, but the aerial border (of sorts) between the US and Afghanistan. The book toys with the idea of land, something that can be literally dug up and stolen – how deep goes identity? And then, the book offers us other oddities, among them neologisms, the central one of which is rendered by Lisa Dillman as “(to) verse” which means something like “to leave.” Dillman herself explains her coinage in a lovely and quite long and extensive translator’s note at the back. The original word in Herrera’s Spanish text was “jarchar,” a neologism derived from the Arabic. Neologisms and other mildly alienating tactics keep the readers on their toes, bar them from settling into easy identifications, and simple realism. That’s necessary because, except for a few passages here and there, the mythology of the novel, despite its importance for the book, is not expounded on at any length, really. By pushing his readers into a constantly angular sort of metafictional mood, he allows them to find all the subtle (and less so) references to the 9 levels of the Mictlan underworld, and appreciate the many levels of Makina’s quest. By engaging Aztec mythology, Herrera also opens a conversation with the narratives of Mexican nationalism, its limitations and possibilities, its overall scope. Of course there are the many small questions, such as: what does it mean when you are Mexican in the US? What if you can pass? What is the meaning of “home”? But more generally, Herrera’s touching on themes of life and death, of the impermanence of identity and the possibility of stories to resist that process of fading away. Herrera offers a petit récit and a Grand Narrative at the same time, undercutting the importance of both. And more importantly, he offers a magnificently written book. Look, all the details of speech and narrative, all the little linguistic and rhythmic details are not what really holds that novel together – it’s Herrera’s plain skill at telling a fantastic story. I have recently remarked on novels that are intellectually interesting but lack a storyteller’s heart – well, this little novel can do both, and with an apparent ease that makes me crave for more work by this extraordinary writer. A great novel. Go, read.

6 thoughts on “Yuri Herrera: Signs Preceding The End of The World”