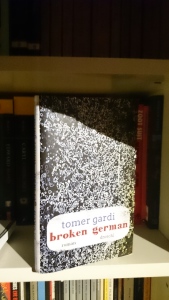 This novel is German – its author is not. This helps, I think, explain why its author is one of the most vital German literary voices to emerge in 2016. Like Sharon Dodua Otoo, Gardi read a portion of his book at this year’s Bachmannpreis, and even more than Otoo, his reading caused the jury to debate questions of nationality and language. How German is it? What does it mean to write in German – what are the limits of nationalism when it comes to languages? Overall, Gardi’s text was one of the four or five best ones read at the competition, and so I was genuinely excited to read his novel, called Broken German – and I was not let down. Broken German is written in, indeed, broken German, and Tomer Gardi’s mastery of his invented idio/sociolect is profound and impressive. The writer that comes to mind most readily as a comparison is the Scottish master James Kelman. Like Kelman, Gardi is interested in the way language reflects on the personal, social and ethnic background of its speaker/writer. And like Kelman, Gardi eschews overly artificial literary games for the sake of literary one-upmanship. Despite all the metafictional comments scattered throughout this little novel, and the games with literary allusions, Gardi never loses sight of the inherent importance of using language in a social context. I suppose I must sound like a broken record at this point, but German literature has grown so dull in the last decade, repeating old patterns of self satisfied literary masturbation over and over that without the influx of immigrant literature, it would already have died a dull and boring death. Tomer Gardi and Sharon Otoo, neither of whom are German, are in the process of injecting this threadbare literature with a much-needed shot of urgency, awareness and stupendous literary skill. There is a joy in writing in this book, a sense of the worth of words, which almost made me applaud as I was reading its final sentences. Broken German is a deeply flawed, imperfect novel, and one of the best German novels of the past decade.

Tomer Gardi is an Israeli writer, usually writing in Hebrew. This is not, as far as I can tell, the beginning of a career of writing in German, and one supposes that part of this novel’s extraordinary power is derived from the author’s imperfect command of the language. To be clear: nobody really knows, as far as I can tell, how good Gardi’s German really is. When questioned, Gardi tends to tease his interlocutors, toying with them, giving us a performance that underlines how silly the question is, to begin with. Everything is inscribed into the book itself, which is never 100% serious about almost anything. There is a passage towards the end where Gardi gives his book to a friend who remarks that as Gardi’s German improves, the book suffers. I mentioned Kelman as a reference, but, really, I’ve never in my life read anything ressembling Broken German. Gardi’s novel is not written in a well-defined sociolect. There is no immigrant or deviant grammar underwriting it. No “Kanak Sprak,” to cite Feridun Zaimoglu’s famous book which invented a term for a turkish-German sociolect. The book is not written in Turkish (or Hebrew) German. It’s written in “broken German” – Gardi invents a language of mistakes. We are aware of two levels in his work: the spoken level, the broken language of immigrants, a mixture of deviations due to language of origin, and deviations aligning with certain sociolects common among German immigrants. What makes the novel such a success, however, is the second level: the writing. Intentional or not, the novel is wildly inconsistent when it comes to spelling German words. There is no consistent way mistakes are made, and any given word can be misspelled in a variety of ways throughout the book. What’s more, Gardi will sometimes misspell simple, short words, yet get more complicated grammatical and orthographic constructions perfectly right. The effect of this sort of randomness is an emphasis on the process of writing, highlighting the author’s social and political contexts even further. 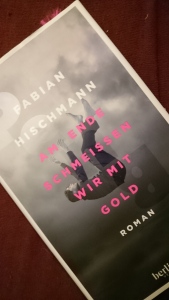 German literature, with the advance of writers graduating from the MFA mills in Leipzig and Hildesheim, has increasingly moved away from acknowledging these contexts. Increasingly, German writers will produce literature as oblivious to contexts as some of the more laughable post-war writers did. Well-off, middle class writers creating a nationalist literature of Germans touring the world, uninterested in anything but navel-gazing. One of the most egregious examples is Fabian Hischmann’s debut novel. It was largely reviewed negatively in Germany, but it reached some shortlists and its author won multiple fellowships. It is impossible to overstate how bad Hischmann’s novel is. I’m singling it out here because, when it was published, it became a focal point for some frustration with MFA-style writing, exemplifying an écriture unconnected to experience for some critics. The book’s main flaws, however, are not unique to Hischmann or even to MFA writing. In it we find the sloppy prose that is a characteristic of a lot of contemporary writing, some of it award winning, and in it we also find the aforementioned insouciant treatment of countries other than German. Of course, this is not unique to Germany. There is plenty of French literature or American literature that treats foreign places with an unpleasantly ethnocentric condescension, but German literature has had a difficult to define quality about it that somehow made it worse. The best summary of this is a short essay by Rudolf Borchardt, an early 20th century conservative German writer, who published an anthology called “Der Deutsche in der Landschaft” and wrote an introduction wherein he claims that Germans have a particular knack for analyzing other countries, when, really, German literature, with a few notable exceptions, is full of strange phantasmagorias of the abroad. In Hischmann’s book, we are treated to an unpleasant trip to Greece, and an even stranger trip to the US, at the center of which is some odd fantasy of shooting up some drug dealers in New York with a gun purchased on the black market. The book is a mess, but the idea of Germans traveling to other countries to sort out the less rational, less intelligent, less literate citizens of those countries is incredibly consistent and common. Hischmann’s bad luck is that he’s a shit writer, but Bodo Kirchhoff, winner of this year’s German Book Prize, is a much better author and his awardwinning novel(la) is basically the same chauvinist fantasy.

This is the context in which Tomer Gardi’s book appears this year, exploding all these conventions and ideologies. There is no certainty here, and no concession to German expectations of order and hierarchy. It’s not clear what’s intentional and what isn’t, and this is written into the substance of the book itself. Tomer Gardi’s German turns on itself. He uses, like Jelinek, idioms and clichés in order to subvert the ideologies inscribed into German. He references Döblin’s Berlin Alexanderplatz in a novel that has a lot in common with that masterpiece, which both undercuts the seriousness of his plot, and reinforces the sense of density, urgency and determination. Early on, Gardi states that language is the focal point of his novel (but by stating this, instead makes the discourse about language and novels the focal point, of course), and laments it. And indeed, 1200 words into this review I haven’t even mentioned the book’s plot, because the language’s power appears to overwhelm the plot. What a plot it is, though! It includes mistaken identities, buried knives, lies, dead bodies shoved into closets and the question of whether a Jewish visitor to the Jewish Museum automatically becomes an exhibit in said museum. It includes history, truth and memory, it includes butchers with their arms up to the ellbows in the blood of murdered Jews. It includes a disquisition on authorship that may or may not be related to works like Philip Roth’s knotty Counterlife or the more sombre Operation: Shylock. And as I write all this I worry about over-analyzing this book – it is, apart from being dense and brilliant, also just a ton of fun. I marked 2/3rds of its pages. It is endlessly quotable and readable and rereadable. So it is all that. But it is also important. 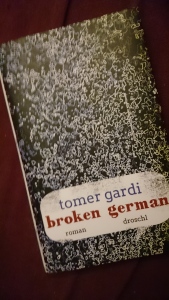 In this age of Trump and Le Pen and the German AfD, immigration has become an object of suspicion, and language (or rather: the correct use of language) has become one of the battlegrounds of the immigration debate. The disorderly language of the book, the “broken German,” is an attempt, I think, to decline to perform otherness without also assimilating. When Gardi read his excerpt at the Bachmannpreis, the jury asked him: do you really speak German this badly? Is this language artificial or is this just how you speak? At issue was Gardi’s ability to write otherness, perform it, make it palatable, rather than just being other. Being other is no art, it is a deficiency in an age of chauvinism, racism and nationalism. Gardi declines an answer. He gums up the works. Being a Jew in today’s Germany is complicated. Gardi places his protagonist in the heart of the German memorializing complex, complicating the simple narratives. He declines to take part in the literary and political games. Broken German – that title sounds like a deficiency. Yet maybe in a time of resurgent racism in a country that committed two genocides in the 20th century, German needs some breaking. Tomer Gardi’s book is necessary. It is also very good.

As always, if you feel like supporting this blog, there is a “Donate” button on the left and this link RIGHT HERE. 🙂 If you liked this, tell me. If you hated it, even better. Send me comments, requests or suggestions either below or via email (cf. my About page) or to mytwitter.)